The Abercromby Gold Project is located in the world-class Wiluna Gold District of Western Australia – one of Australia’s most productive gold-producing regions (+40Moz), and second only to Kalgoorlie globally in terms of production.

Abercromby sat dormant in the portfolio of a base metals company while gold majors developed the gold mines that now hem it. Prior to BMG, the last drilling for gold took place in the early 2000s. BMG’s maiden drilling program in December 2020 represented the first drilling campaign at Abercromby in more than 15 years. 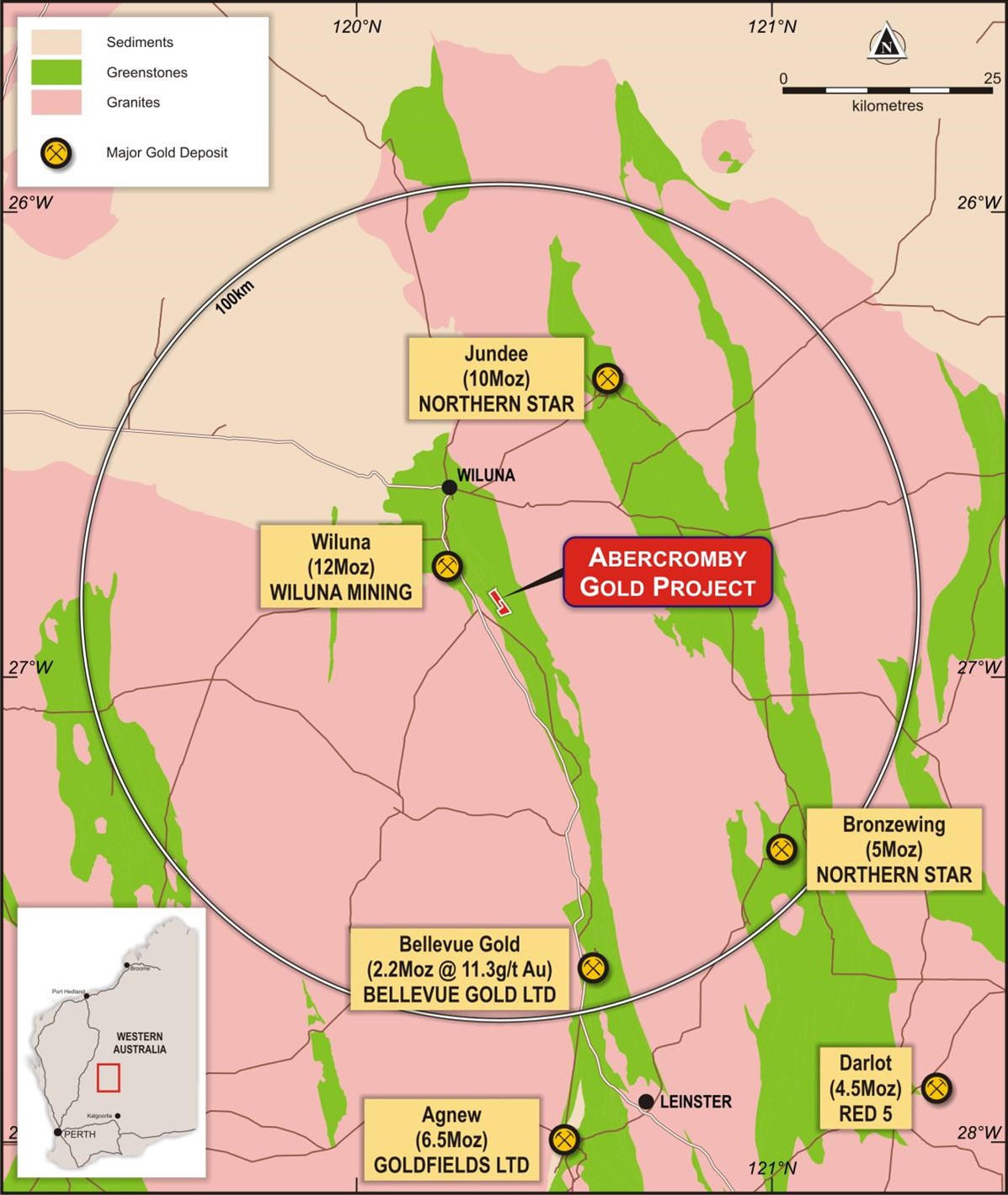 Through systematic exploration, BMG has uncovered an extensive mineralised system with numerous high-grade intersections at the Capital Prospect. The known strike exceeds 1.5km, and mineralisation remains open in all directions with potential to add significant ounces. Diamond drilling in 2022 has more than doubled the mineralised envelope, and substantially enhanced the resource potential. 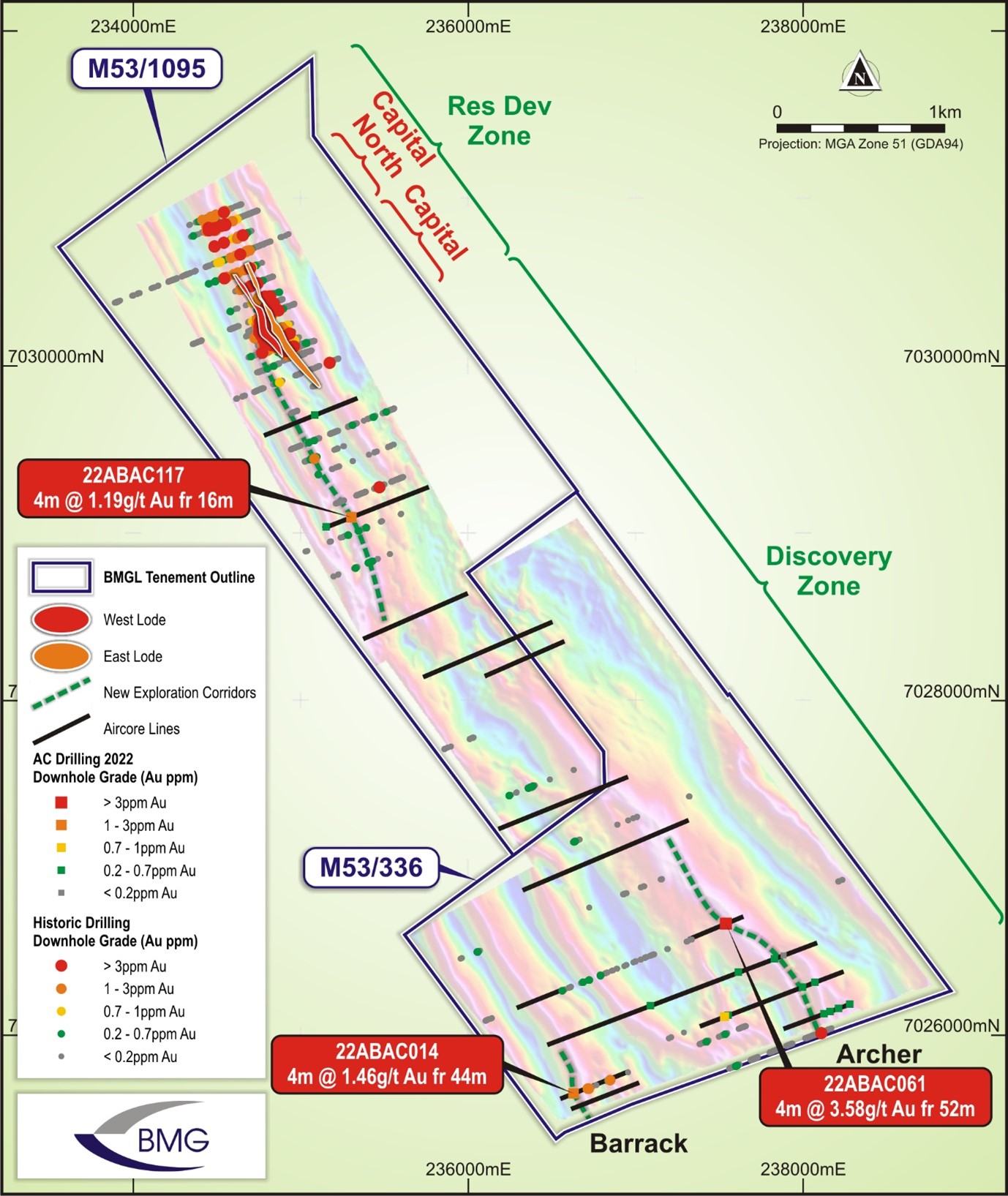 The company has a two-pronged exploration strategy at Abercromby, with reverse circulation (RC) and diamond drilling at the highly prospective Capital Deposit, and a regional aircore program to grow the pipeline of exciting greenfields targets for follow-up drilling.

Drilling at the Capital Prospect has largely been focussed with the southern portion of the area, where two broadly-defined steeply north-east dipping mineralised lodes, the West and East lodes have been identified. Diamond drilling has confirmed depth continuation to at least 400mbs and mineralisation to >500mbs, and there are indications of further mineralised zones in the Capital area both to the east and west of the main zones. Mineralisation remains open at depth and along strike. 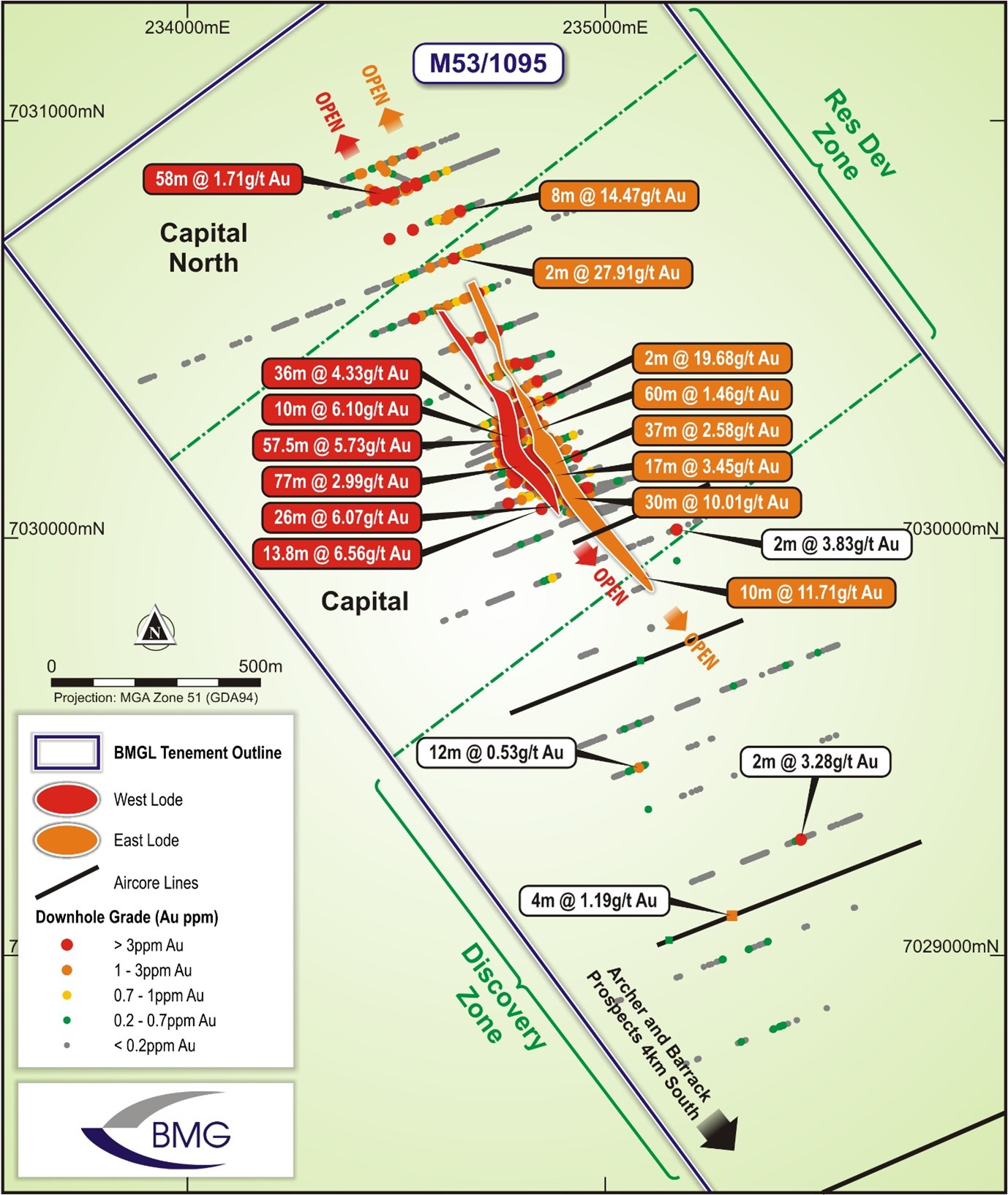 BMG’s commenced its maiden program at the Capital Prospect late in 2020. The program confirmed gold mineralisation across broad zones, and down-dip continuity that remained open. It identified and confirmed two broad gold lodes within the Capital Prospect – the West and East lodes. Mineralisation in these gold zones was interpreted to be open in all directions with potential extensions to the north and at depth being of priority interest.

Results from drilling campaigns have included:

Following the maiden campaign, the Company conducted a sub-audio magnetic survey of the project area and, in July 2021 commenced a major 6,000m drilling program focussed on extension hole and infill drilling at the Capital Prospect, as well as initial testing of targets identified in the geophysical survey.

The campaign continued into the new year and, in January 2022, 1m RC results returned a number of very wide intercepts, punctuated by very high-grade gold including:

Importantly, drilling identified a new eastern lode previously unidentified by historic drilling. This opened up the area to significant extension of the potential resource envelope while the diamond drilling component of the campaign continued.

In April 2022, the company reported that the ongoing program had more than doubled the likely size of the deposit and intersected extremely high-grade gold in fresh rock. Results from the deepest drilling of the program proved that the system was fertile at depth, and confirmed that geological and grade models had successfully targeted mineralisation at or very close to predicted locations, with extrapolation holding true at distances in excess of 250m.

Highlights from the intersections of thick, high-grade gold included: 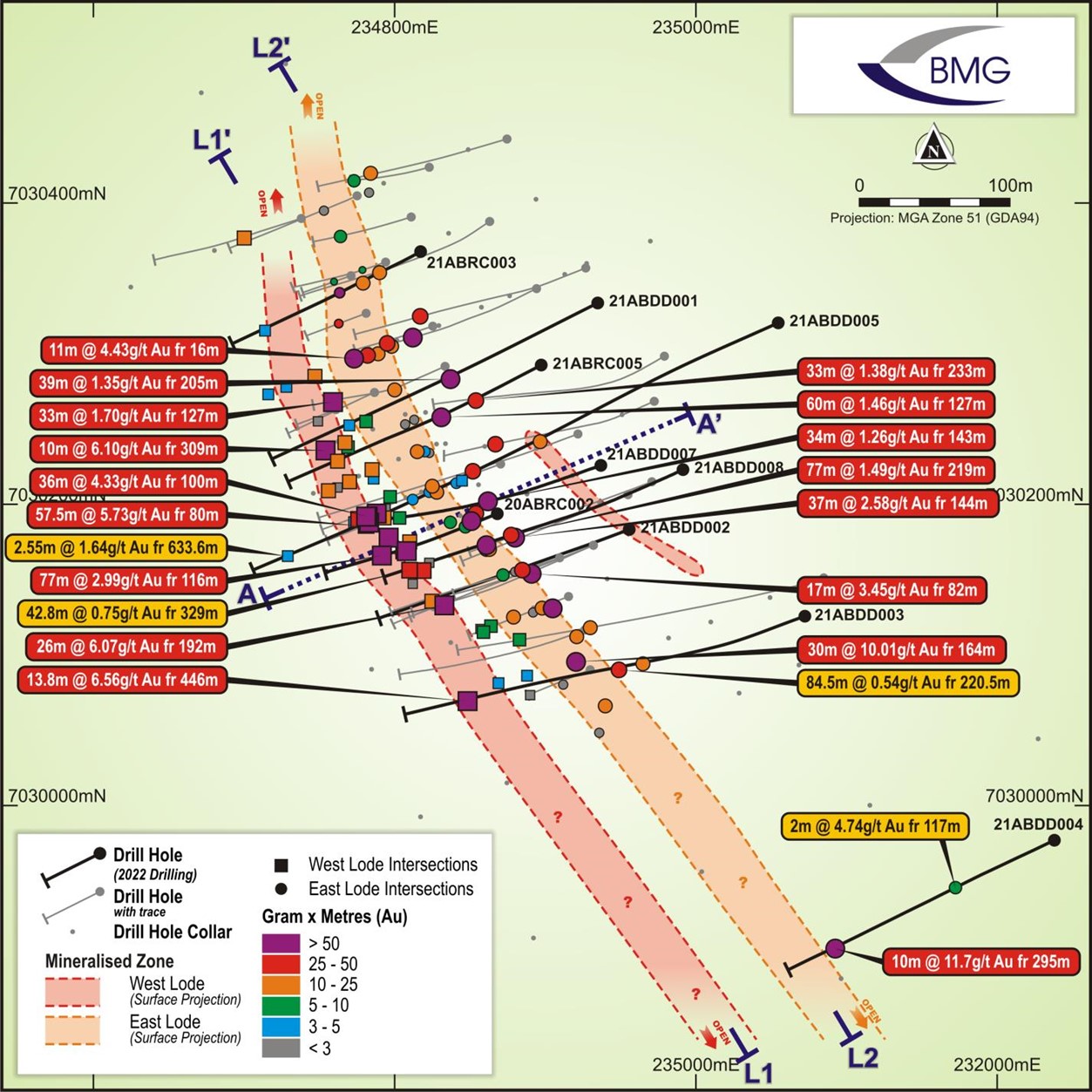 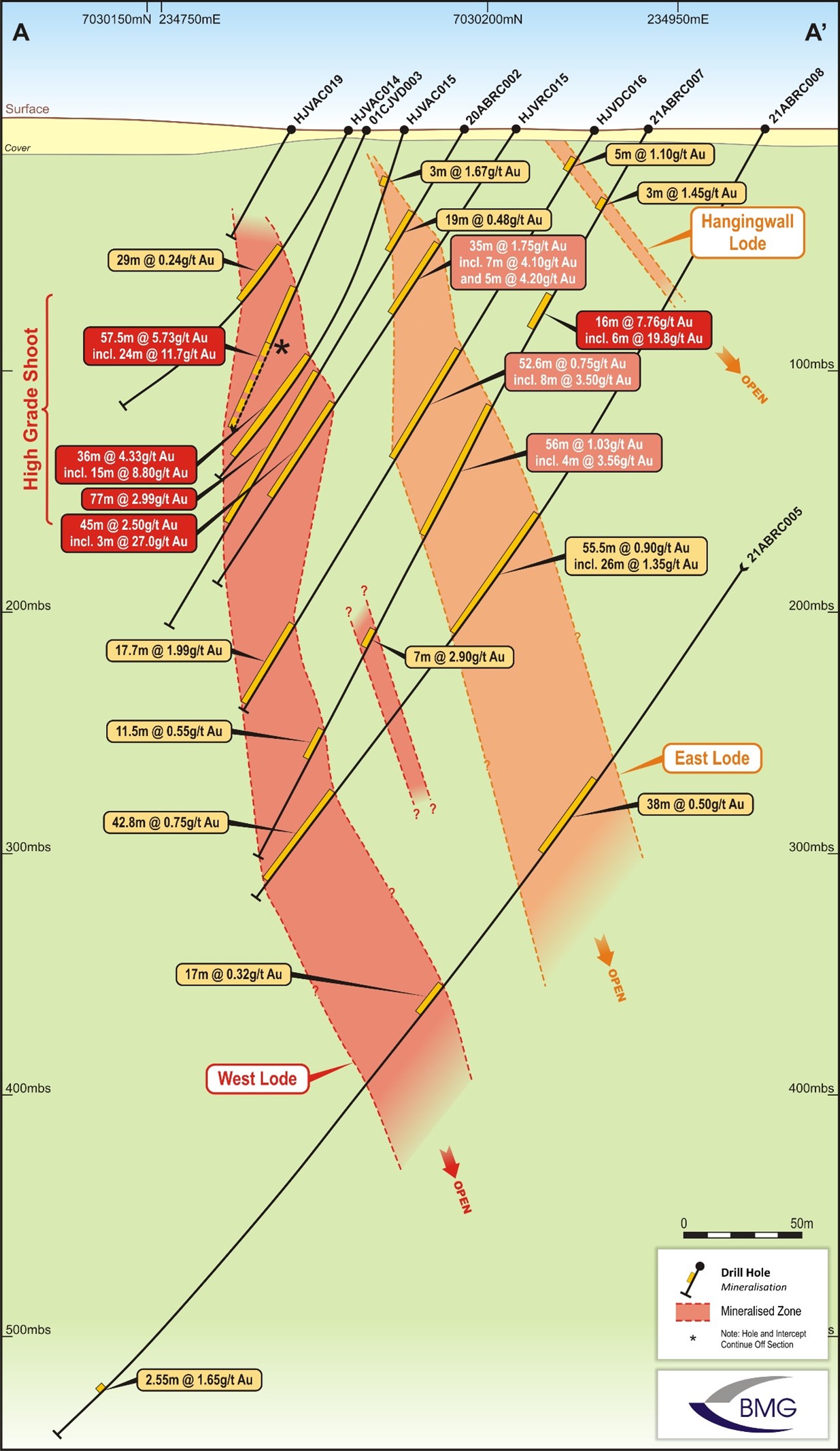 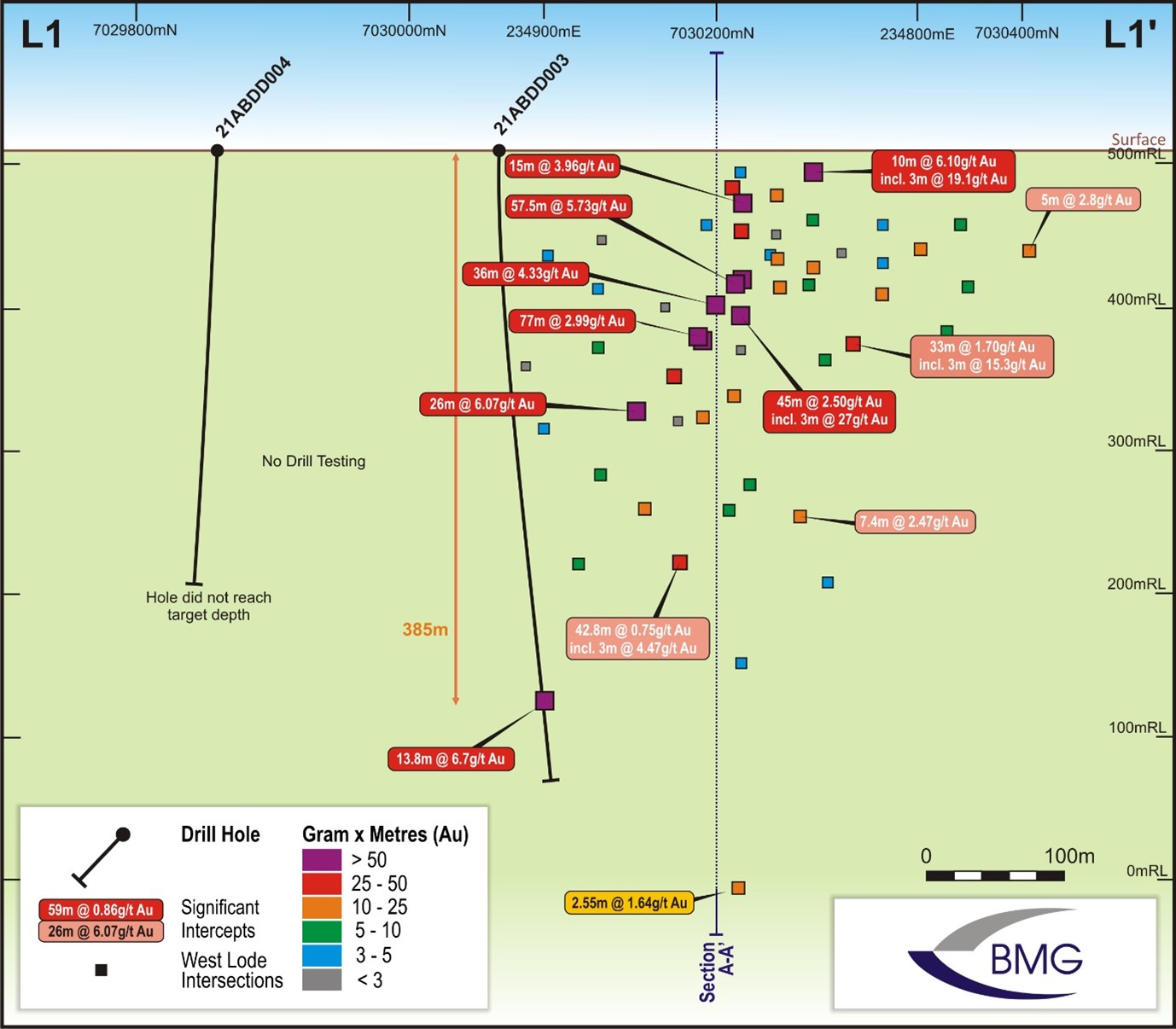 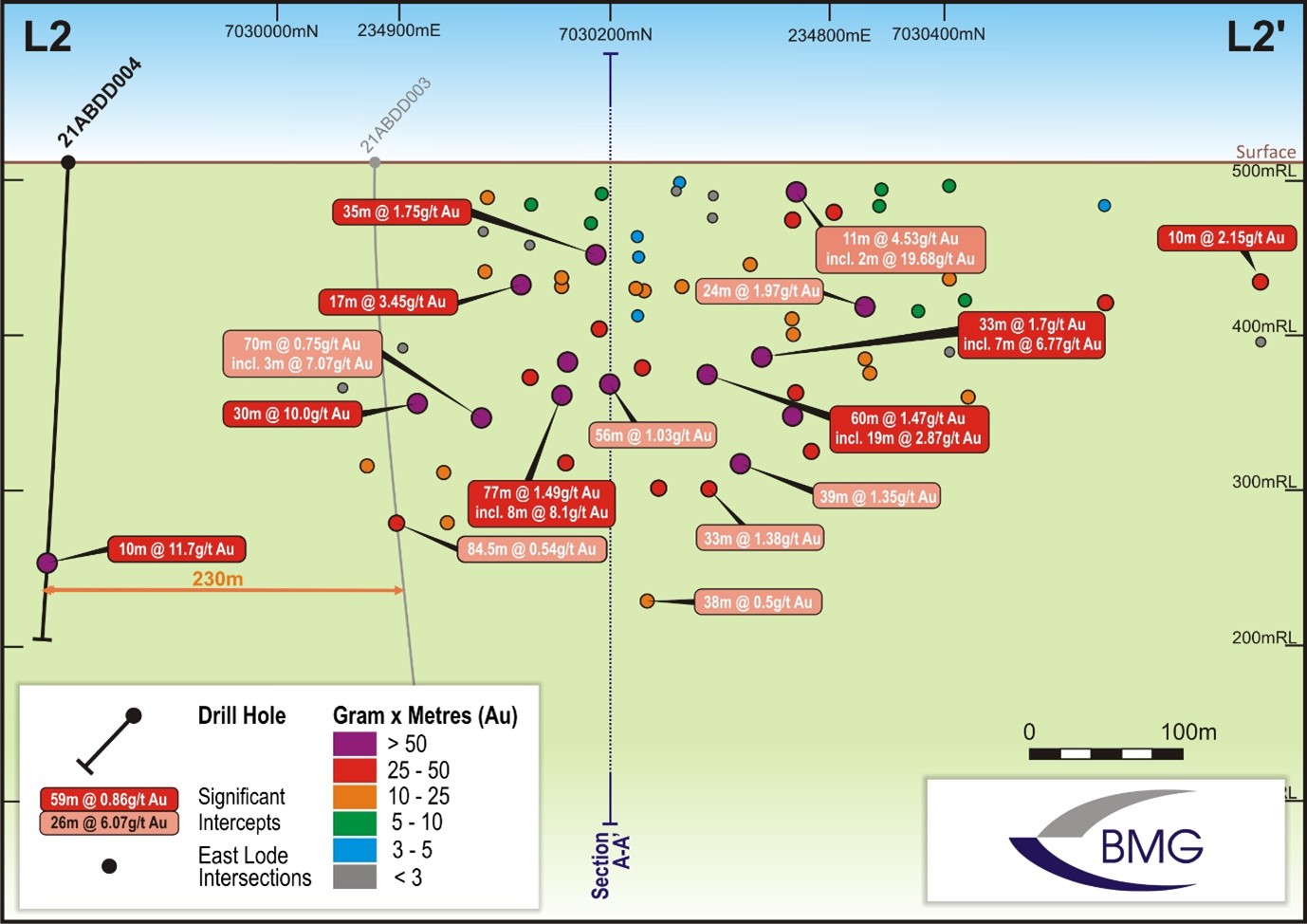 Some of the key results reported included:

Other assays confirmed very wide intercepts that were punctuated by very high gold grades and added to the known mineralised envelope which remains open at depth and along strike. This included 20ABDD002 which intersected 31m @ 6.16g/t Au from 162m, as part of a broader zone of 77m @ 2.99g/t Au from 116m.

The east lode has opened up an area for significant extension of the mineralised corridor, and the west lode remains to be tested. Step out drilling to the north of Capital continues to intersect gold mineralisation that could potentially increase the strike of mineralisation to more than 2km.

To continue the growth pipeline of greenfields exploration targets, BMG conducted a regional aircore program to the south of the Capital Prospect in order to test a number of targets generated by an SAM survey.

The first-pass of aircore drilling delineated a series of highly prospective gold anomalies, and opened up multiple target areas for more intensive exploration.

The coincidence of geochemical and geophysical indicators at these greenfields targets reinforces BMG’s view of strong prospectivity within the project area and, with large untested distances either side of many of these new gold anomalies, the Company is confident that one or more Capital-style deposits could easily be hiding in close proximity.